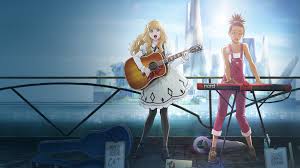 The titular characters from the show Carole & Tuesday.

Carole & Tuesday is an anime TV series premiered worldwide on Netflix in 2019, directed by Shinichirō Watanabe and Motonobu Hori, and animated by studio Bones. Spanned over 24 episodes, with a special broadcast golden week special aired on Line Live on May 1, 2019. The golden week special includes a behind the scenes documentary, recording sessions with the singers, and music video for the opening theme song "Kiss Me"[1].

In the world where mankind migrated to Mars, where they live in comfort due to the advancements in AI. The story centers around Carole Stanley, a part-timer by day and keyboardist at night who lives in the metropolis of Alba City, and Tuesday Simmons, who hopes to pursue music with her acoustic guitar and escape the grip of her wealthy family back in Hershell City. The two perform music together after a fateful encounter, up against the AI singers that dominate the music world. The two believe that together they can convey their feelings trough songs[2].

The racial diversity is a selling point of the series, as Carole's hair and skin tone was depicted in a real way. Which is uncommon in a medium where racial features tend to be over-exaggerated[3]. Representation can be seen in the series showed by Carole as the main character that makes up half of the musical duo, where she was also portrayed positively as a fashionable, discipline, and determined woman. [4].

Some perceived the series as a window dressing for a story about music bringing people together using real world events. It is also notable that the depictions of the darker skinned characters originated from Earth, seeking refuge on Mars. While the lighter skinned characters were born on mars[5]. On the second-half of the series, the main story shifts from personal narrative to focusing on the socio-political problems between Mars and Earth. This particular part in the story's execution was heavily criticized as it considered to glossed over the brutal realities, and underplayed the gravity of the subject on how music can become a powerful tool to resist systemic oppression[6].