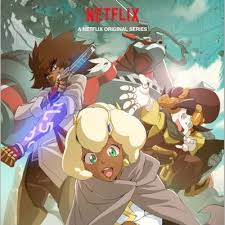 Main characters of Canon Busters, Philly the Kid, S.A.M, and Casey (from left to right).

Cannon Busters is an American comic book series created by LeSean Thomas in 2005. An anime adaptation was later released on Netflix on August 2019 as a 12-epiode series[1]. Despite the success of the anime, Netflix has yet the greenlit Cannon Busters Season 2[2].

Set in the land of Gearbolt, the series follows the adventure and exploits of S.A.M, a high end friendship robot, Casey Turnbuckle, an outdated grease-monkey repair robot, and Philly the Kid, a wanted immortal fugitives. Embarking on a journey determined to reunite with her best friend Kelby, the missing heir to her Kingdom under siege[3].

The comic books and later the anime features diversity and representation. The cast is primarily comprised of people of color who are distinct from one another[4]. It was created by LeSean Thomas an African-American, made the portrayal of dark skinned characters that are not a blatant stereotypes or racist caricatures[5]. To quote an article released by cbr.com "The series has appealed to Western audiences looking for a diverse cast is because it was made by a Westerners wanting diversity in anime"[6].